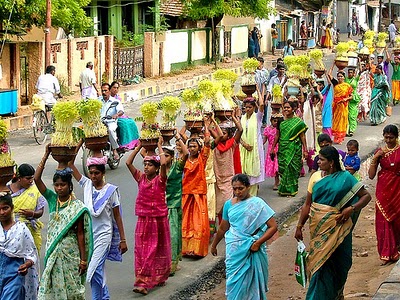 freshes of the rivers and to pay tribute to water’s life-sustaining properties. It is

celebrated near river basins, water tanks, lakes and wells etc. of Tamil Nadu when the

water level in the rises significantly heralding the onset of Monsoon

In India the rivers Ganges and Yamuna, Cauvery and Godavari are considered sacred.

Just like the earth gives us food, water is considered as a sacred necessity to meet the

needs of individuals. People began to worship water in the form of wells, tanks and

rivers. It is common among people to throw fruits, saffron cloths, etc., when the rivers

Adiperukku, otherwise called Pathinettam perukku is peculiar to the all the perennial

celebrate the water rising levels due to the onset of monsoon, which is expected to

occur invariably on the 18th day of the solar month, Aadi corresponding to the 2nd or 3

Perukku denotes rising. This festival is observed predominately by women in Tamil

Nadu. The Adiperukku, as a water-ritual, celebrated by women is to honour nature.

The association of this ritual with fertility, sex and reproduction is both natural and

human. This water ritual practice is performed on the banks of Rivers, which is

described as a rice-cultivation tract. The history of this ritual practice dates back to the

ancient period and was patronised by the Kings and royal households. This ritual

practice existed in various historical periods. Aadi is the month for sowing, rooting,